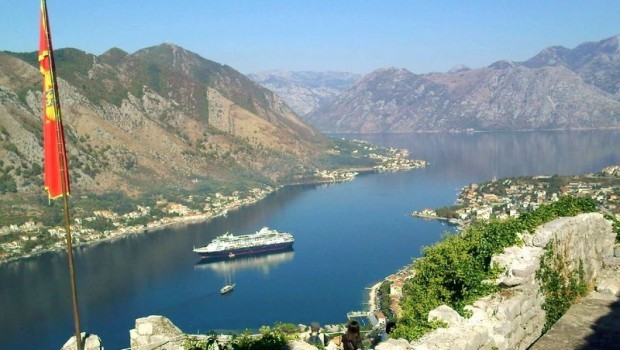 Vini Pu and other Montenegran oddities

I think it is high time I published some thoughts (and photos) on Montenegro.

Now I find myself on my last day in Ulcinj in the far south, with the call to prayer at the mosque on Friday the first I have heard since I was in Morocco. The owner of my guesthouse described himself as Albanian. I asked how long he had lived in Montenegro and he replied – ‘my family is here more than one hundred years’. It’s hard to comprehend the strength of tradition and family roots in this part of the world. 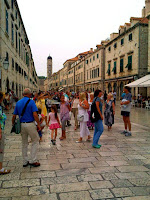 My progress south began a few hundred kilometres and 30 days north of here in Dubrovnik, which the geographers will recognise is in Croatia. It’s the best arrival point as it receives so many tourists and thus really cheap flights. The town has a huge reputation for prettiness but, to my mind, this is seriously reduced by the absence of any local shops or inhabitants – the old town is almost 100% for tourists. And there are thousands of them. Going back a couple of hundred years, it was traders and sailors as Dubrovnik was one of a clutch of trading mini-states down the Balkan coast. And at the southern end was Ulcinj, lair of up to 400 pirates who caught the merchant ships sailing past.

But I am getting ahead of myself. The ride into Dubrovnik from the airport is just like the Amalfi Coast in Italy and parts of the corniche in the south of France, with two lane roads clinging to cliffs and shear drops into azure blue seas. But this is just a taster. When you go south and cross the border into Montenegro (with much stamping of passports), the road tracks away from the Mediterranean and along the shore of what seems like an endless fjord (though I am reliably informed that it’s a sunken river valley – with no idea why there is any distinction between the two…). 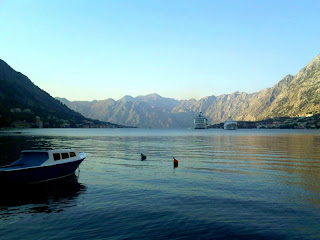 Every turn reveals even higher grey cliffs and mountains, and yet another small town that you think is Kotor – but it isn’t. And that is because Kotor is the end of the very winding route – as far as you can go on the fjord, and perhaps 30km from where it started. The sea isn’t tidal and it’s crystal clear and inky blue as it quickly shelves to depths over 50 metres. And with no tide, the houses and roads are built to within a few feet of the lapping water. This was a wealthy city in its day, an outpost of Venice, and home to many fine mansions owned by shipping magnates. 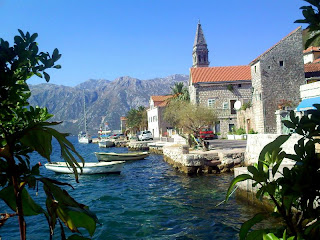 Nowadays, the mansions are crumbling, and the only big ships are the huge cruise liners that visit almost daily, their slab sides looking for all the world like a floating communist era hotel (with the notable exception of Seabourne, whose ships are undeniably sexy, with a real waistline at the mid section). How these giants arrive in the dawn and depart at dusk unaided and without running aground, I do not know. 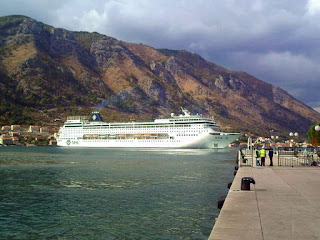 The apartment we rented is right in the middle of town and by the cathedral, which is fine except for the great peal of bells on Sundays. 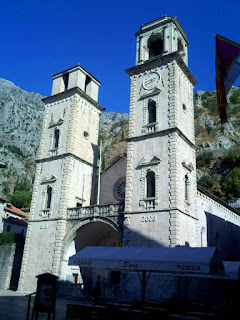 Anette, whom I met in Sri Lanka, has been sharing the apartment with me and as one of us can therefore cook, we have been supermarket shopping which means trying to interpret labels in multiple languages – none of which bears any resemblance to English or Swedish. As it happens, there is barely any milk in the supermarkets but shelf upon shelf of every type, consistency, flavour, and ingredient type of yoghurt. And barely any cows butter but huge slabs of sheep or goats butter in the market which is semi fermented into a sort of high fat yoghurt spread. The fruit and veg are all irregular shapes and sizes just like they used to  be in the UK/USA/Australia before the supermarkets decided we needed the illusion of perfection in appearance and yet absence in flavour. Then there is the coffee. Turkish and therefore ‘black as night; hot as hell; and sweet as love’, excepting where trendy cafes for the young set sell only espresso – what a shame. And the baklava – ah well say no more. 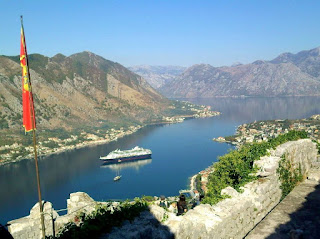 Kotor is protected on all sides by fairly substantial walls, with some climbing crazily up the cliffs where I cannot imagine any invading force could enter without serious risk to life. The 250 metre climb to the top is good fun, especially in the early morning before the cruise ships send their intrepid hundreds, and while the sun is still behind the mountains. Once on top, the view is stupendous, with the concrete and steel remnants of more recent wars also in evidence.

When trying to convince my UK bank that I was not a Balkan credit card thief, I realised that most people have never heard of Montenegro (though I do admit the fraud department sounded like they were based in Bangalore, so maybe the geography of the Balkans is not taught in India…). And for those who are still confused, Montenegro has been an independent nation since 2005. Not very old really. And for neighbours it has Albania, Bosnia, Serbia, Kosovo, and Croatia, which is a pretty explosive mix. I recall the Balkan Wars after Yugoslavia broke up but I don’t think I understood until I got here how incredibly isolating the geography is. It really is possible to not know the people in the next valley, and that folks some 40km to the south were subject to the moslem Ottoman Empire, while your neighbours to the east grew up under Eastern Orthodox Catholicism at the very same time as you were a very successful seafaring outpost of Venice, and thus Roman Catholic. What a mess! And this not only gave you different languages, but different alphabets too – Roman and Cyrillic which appear here pretty much interchangeably.

The people seem mostly quite wary of any strangers which I put down to the local tradition, intensified by decades of war and then central communist rule which doesn’t encourage sharing chatter with strangers. So now they want to join Europe, which at present may seem a little like wanting to join the Titanic just after the small incident with the iceberg… But they are putting on a brave show, with every pretty young thing trying to sport the latest fashions from Italy – though I’m not sure stonewashed ripped jeans and white leather jackets and boots are in vogue in Rome right now. And the shotgun wedding still seems to exist (literally in the case of one I saw at the Orthodox Cathedral), with women in groups and guys in groups but almost no public mixing. 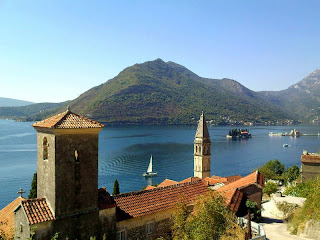 Trips by bus to Perast and by bike on the opposite shore about halfway to the sea really allowed a good look at the little islands in the middle of the channel, and a very strenuous hike up the the church of St Elijah. On the way up there we were overtaken by a very old man with a mule carrying hay. They are fit in these parts. As it transpired, he seemed to be one of only two families remaining in the village surrounding the church, which is accessible only by the steep track we took. 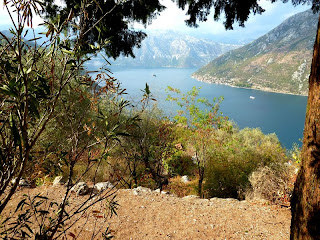 So my curiosity was aroused when I saw a teenager checking out with two not so miniature bottles with green labels, and a bottle of coke. Had to be alcohol. A bit of checking revealed the bottle as about 2 measures of the 40% proof stuff called Gorki. I wondered what the flavour would be. So on checking, the ingredients were water (#1), Ethanol (#2) and sugar. Geez, I’ll go a quadruple 40% ethanol and coke any day!! Oh and the double car fuel cost less than the coke… 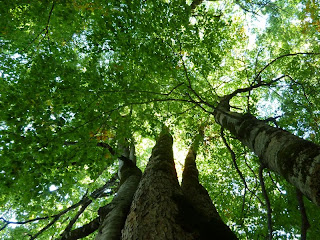 We rented a car two days and discovered how totally dramatic the scenery is. One monastery in a beautiful meadow with frescoes dating back 1000 years and another built into a rock wall halfway up a mountainside. And then there was the Biogradska Gora, one of only three original wilderness forests left in Europe. None of these with any serious evidence of tourists. And trout by a mountain stream for lunch, with a picture-perfect sunset over Sveti Stefan as a chaser (this entire island now an Aman resort with rooms starting in the hundreds of euros per night). 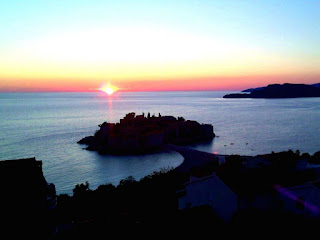 Of course by the end of our stay, we had our favourite spots for coffee or lunch. The cafe by the shore which was perfect for a lazy lunch in the afternoon sun. Or the one in the town where pre-dinner beer or local brandy was the choice – this one with a menu offering chicken buttocks, or pancakes with plazma (not some Star Trek confection, but, so far as we could tell from the box the owner showed us, biscuit crumbs. And then there were the Russian tourists inspecting a large box contraining Vini the Pu, who spoke in very authoritarian Serbo-Croat when his nose was pushed (probably said ‘push my nose again and I’ll set Eyore on you’). 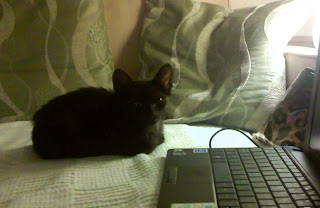 As a parting event, we had seen a small jet black kitten in the narrow street outside our apartment. He wolfed down leftovers we gave him – possibly to dangerous levels for his little stomach. So one evening we took him in for a good feed. It turned out he had beautiful manners, was incredibly needy, and totally house-trained. My theory was that he had been part of a housetrained litter but had been rejected. Anette thought he was older than he appeared. Either way, he would come and go every few days and we grew extremely fond of him.

At the same time, the Russian navy arrived in town with something resembling a rather rusty gunboat, but equiped with full honour guard and band that could play pretty well for inspection by the Russian ambassador on an inspection from the capital. The Russians did need two very disorganised tugs to get them out into the middle of the fjord. I guess crashing a Russian gunboat is a shooting offence…

And so on my last day, I am in an cute box of a bus on a rural lane which is the road linking Montenegro to the outside world. And now after a minimum of hassle, I am in Albania…

And here is the full collection of photos: