What a culture shock; Sri Lanka to Dubai.

But even before leaving Sri Lanka, on the way out of Trincomalee, I saw the last of three fancy-looking children’s playground with very colourful and carefully constructed equipment (lord forbid the little angels should learn to take care). Now there are plenty of things the children of Trinco need, but I figured playgrounds were pretty well down the list – a notion borne out by the absence of any little people in the area. Then I saw the big notice – ‘Donated to the children of Sri Lanka by the people of America’. I’m sure plenty of kindly folks in the midwest felt good about donating playgrounds and I’m sure some politician got brownie points for bringing a big order for the manufacture to his electorate, but it’s not what people most need…

And then I remembered how Luca had attended a meeting with local tourism people and USAID while I was in his guesthouse. It seems that USAID wanted GPS units installed in the fishing boats offering trips for tourists to nearby locations. Now if there is anything a local fisherman in a small outboard boat will know, that is where he is at sea. And I doubt one could fire up, let alone comprehend, a GPS unit. And even then, it’s not going to say ‘at the first opportunity, please make a legal u-turn’…

And as a final thought on Sri Lanka, I noticed on the exit form that the country is officially “The Democratic Socialist Republic of Sri Lanka”. Now in my experience, countries that feel the need to add adjectives to their names are rarely democratic, or socialist, or in real form a republic… And I don’t think Sri Lanka is an exception, beautiful as it is, and charming as the people may be.

So, after surviving a redeye scrum on a low cost carrier to Dubai, I arrived at 5:30am (the trouble with low cost carriers is that a large number of passengers have no idea about the niceties of air travel – I mean, its not a Sri Lankan bus – you have a seat allocated – so pushing and shoving to get inside the plane is pointless; I must confess, at 2am, I did enjoy using size and weight to make a point or two – petty yes, but also satisfying). And then – total civilisation…

Dubai is what you get if you pretend you have unlimited money, a small local population, and access to a big foreign workforce who you can treat as unequals. I knew that they had run out of money doing massive projects, but the number of weird, wonderful, and just plain amazing huge buildings is astounding. The sad thing is that most older areas, if not demolished, have been sanitised to the point where they look just like the Aladdin hotel in Vegas (at least until Arab-themed hotels became a little out of fashion after 9/11 and the Aladdin was restyled as Planet Hollywood – albeit still with a mall that looks distinctly Arabian Nights). 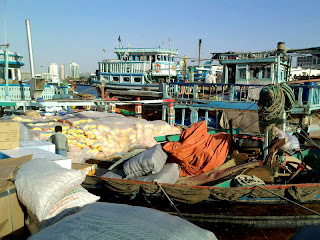 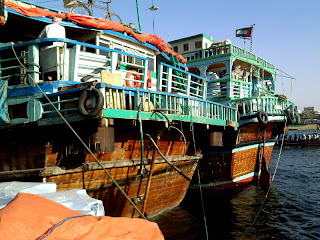 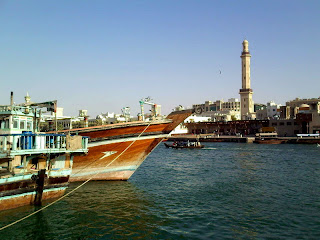 Perhaps the only aspect that seems original is the dhow wharf where the boats are really unchanged, while the cargo emphatically is. Most of the items being loaded are destined for Iran which is just across the Gulf. Everything from refrigerators to air fresheners were being crammed on using only human labour. I suspect it has been like this for many centuries.

A very fancy fashion mall where I took breakfast had an upper floor with restaurants and a huge giant screen wall TV display broadcasting – camel racing. Yes this is Arabia. And then a gentle voice starts to sound familiar. It’s the call to prayer, chanted in true elevator music style just so the shoppers will know to dash off to the prayer rooms in the mall. And my hotel’s pool is restricted to women only from noon to 3pm (when  being in full sun in a burka will be really enjoyable…) 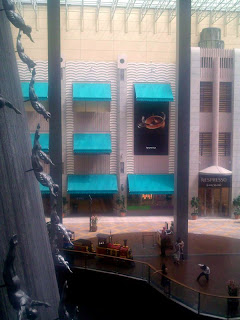 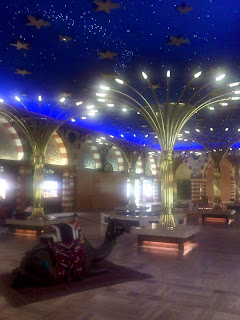 The Dubai Mall totally blew me away – and I am not easily blown. It’s like somebody took the 5 largest malls I’ve seen anywhere and slapped them together – each with some ‘OMFG’ focal point, including a huge 3-storey internal aquarium. 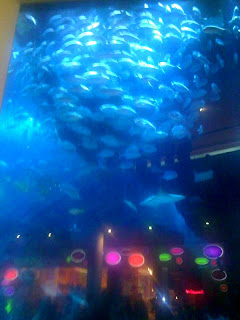 It even has Belaggio style fountains – larger in area but not nearly as powerful which is probably to avoid everyone getting soaked by the fallout in the quite brisk breeze.

There are 1,200 stores with every name brand known to man, some of which I have not seen elsewhere for years. And some that I have, like the UK upmarket supermarket Waitrose. But even they have bowed to local custom with a special room (the bottom notice says ‘for non-Muslims only’; and presumable not for Jews either). 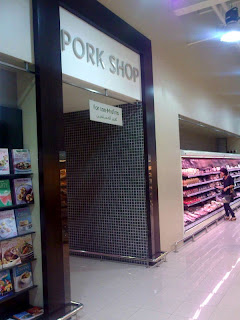 And of course, on the boundary is the tallest building in the world – all 850 metres of it. It stands pretty much alone like some huge needle planted in the sand. 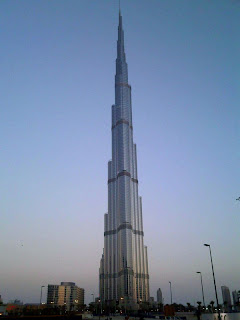